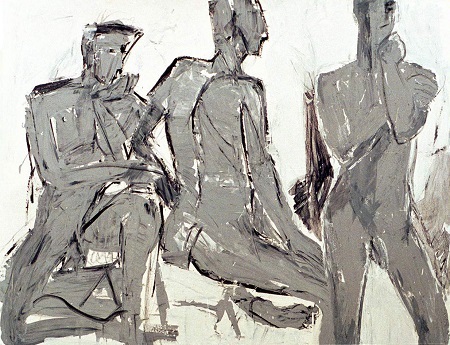 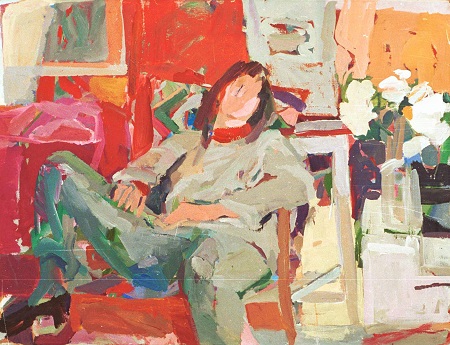 Born in 1936 in Jerusalem, where she lived her entire life, Ziva Sivan is of the generation that experienced the political and cultural birth and development of Israel. The cultural atmosphere provided by her parents was further enhanced by her attendance at Israel’s national school of art, the Bezalel Academy of Art and Design in Jerusalem.  Sivan attended the school in the nineteen-fifties during the period known as “The New Bezalel” that extended from 1935 through the nineteen-fifties. The majority of her teachers were immigrants from Germany, coming from the diametrically opposed aesthetic movements of Bauhaus functional design and German Expressionist painting. These divergent directions in art had a decided impact on Sivan’s development as an artist. Her initial training and early professional life were in the field of graphic design. When she made the transition to painting, drawing and sculpture she focused almost exclusively on the subject of the nude woman,  a popular theme for such German expressionist painters as Otto Mueller and Erich Heckel, whose ideas were passed on to her German-trained Bezalel teachers.  The legacies of both German Expressionism and post World War II Abstract Expressionism are apparent in Sivan’s approach to painting, with aggressive brushstroke and bold color juxtaposition. It was her period of experimentation with media and drawing techniques—necessitated by illness—that resulted in Sivan’s very distinct and personal aesthetic language.

The essays in this catalogue by two of Israel’s leading art historians—Gideon Ofrat and Dalia Manor—provide in-depth explanations of Sivan’s work in the context of the world of contemporary Israeli art. Ofrat describes Sivan’s background and interprets the development of her work: her family story; her years of study at the Bezalel Academy of Art and Design; her transition from the field of graphic arts to exclusively drawing and painting directly from a model; and the spiritually rich, classical drawings from the last years of her life.  Dalia Manor provides at once a more personal and universal interpretation of Ziva Sivan’s art:  the underlying impulse of Art for Art’s Sake and the miracle of pictorial translation that happened for Sivan each time she was confronted with a model and a blank canvas.

The late artist’s family—her husband, Uzi, and her children Noa, Ehud, and Shlomit—was indispensable to the realization of the exhibition and accompanying catalogue that together celebrate over three decades of  Ziva Sivan’s artwork. Since her home and family were at the center of her art world, they had firsthand experience of and insight into her creative motivations and struggles. They were familiar with her models and her artist friends and were witness to the creation of most of her works. I am thankful to them for the many hours they spent reviewing her work with me, helping—through their years of fond memories—to communicate and pay homage to the career of Ziva Sivan.